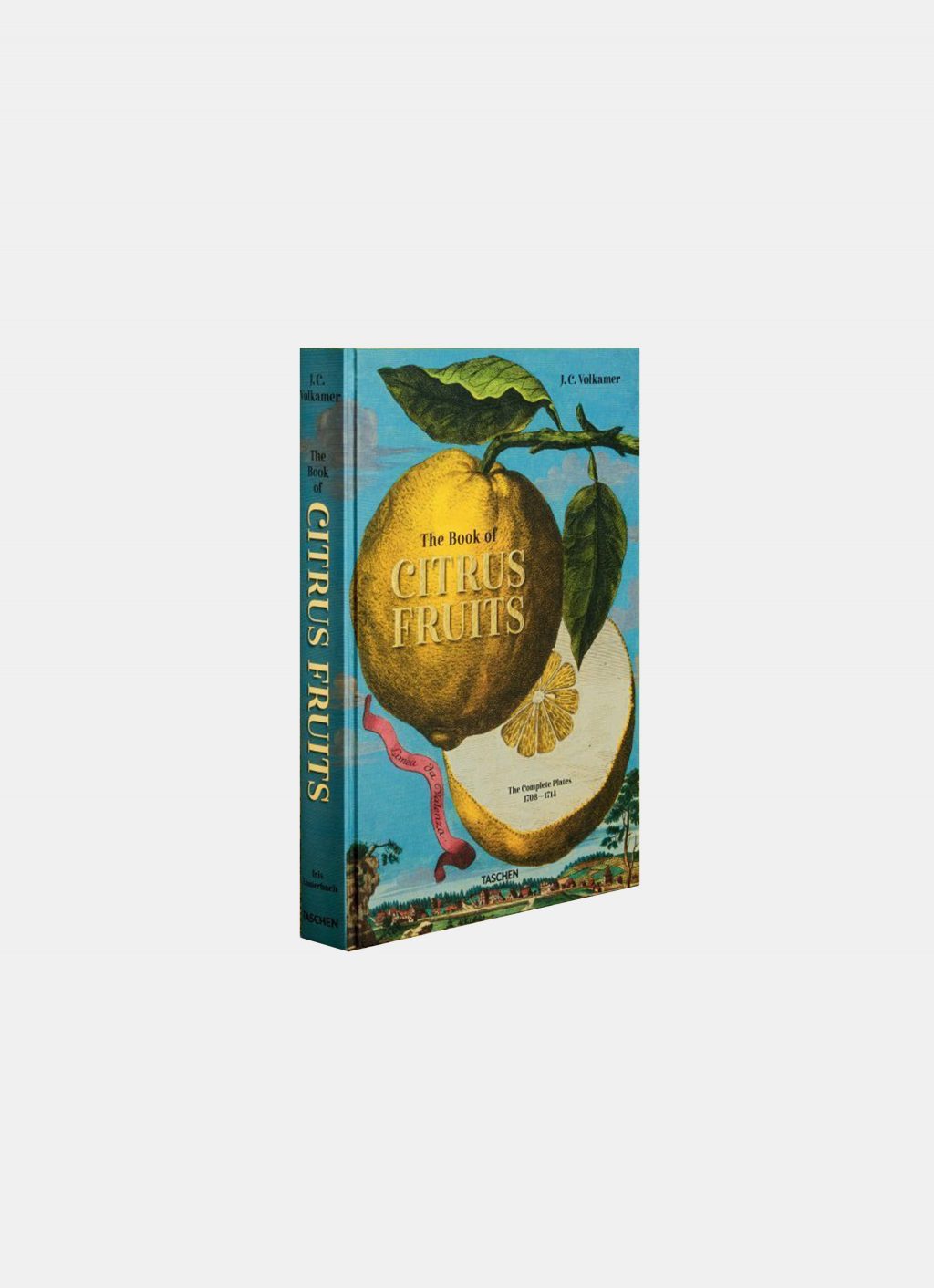 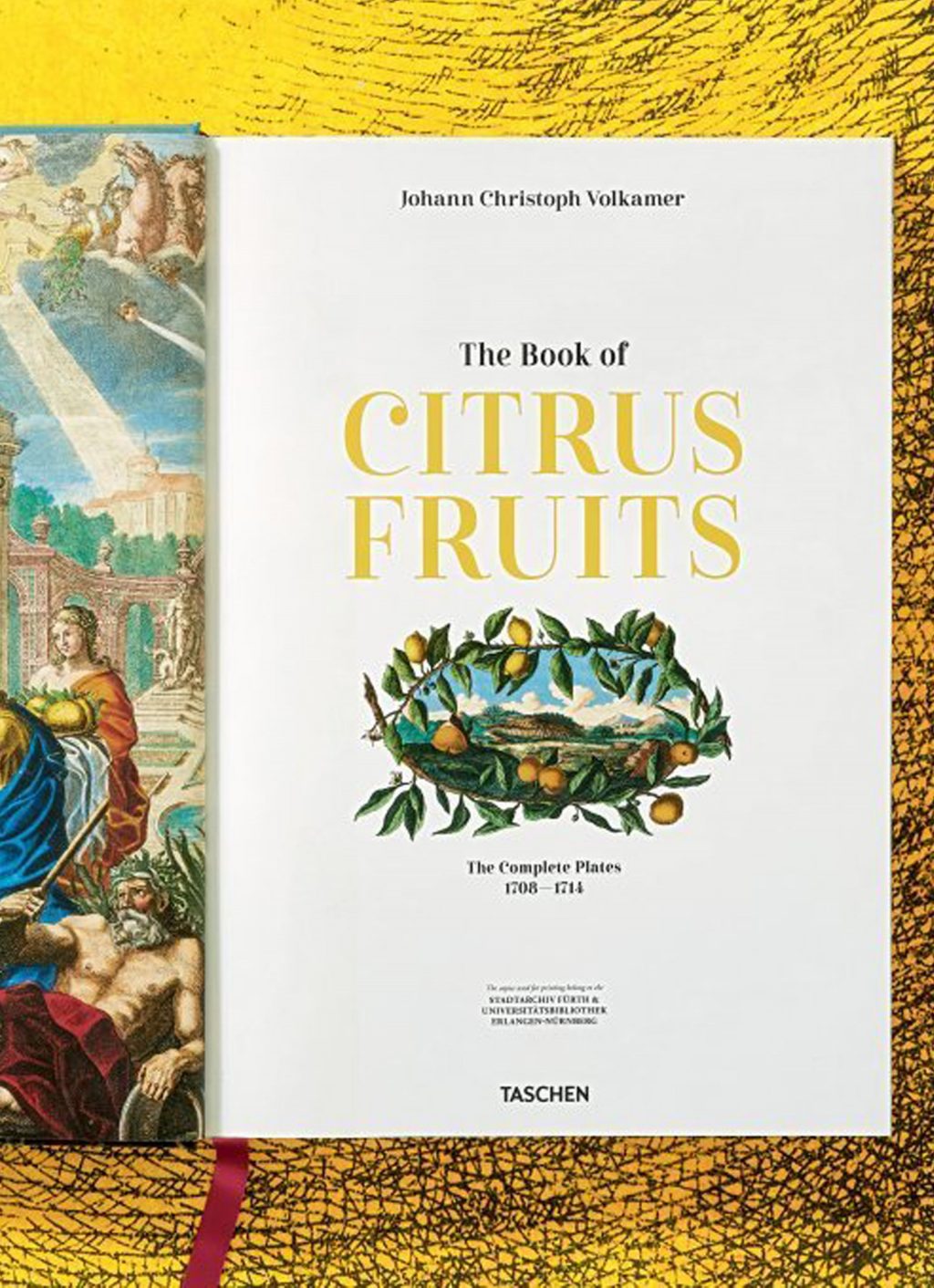 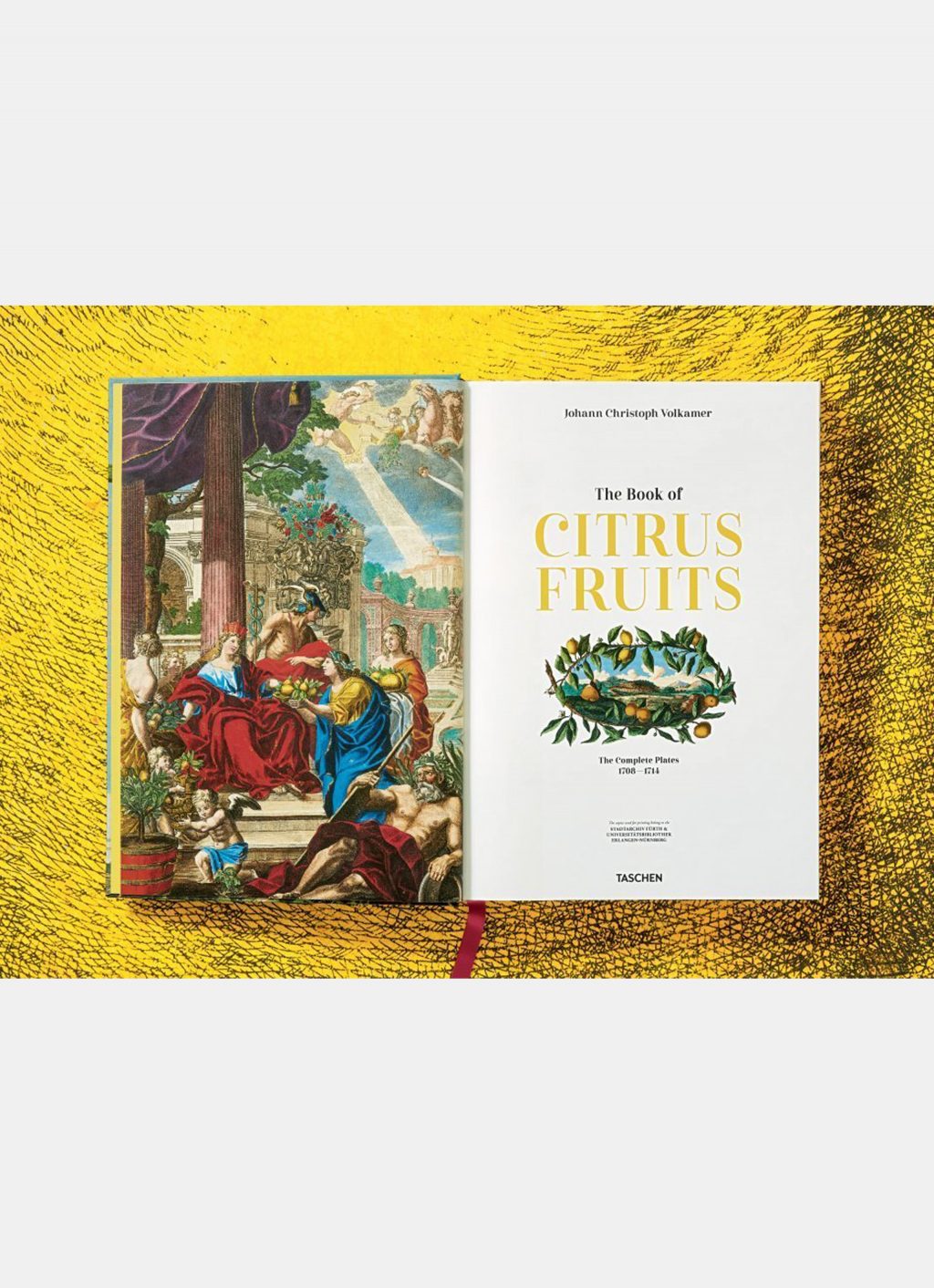 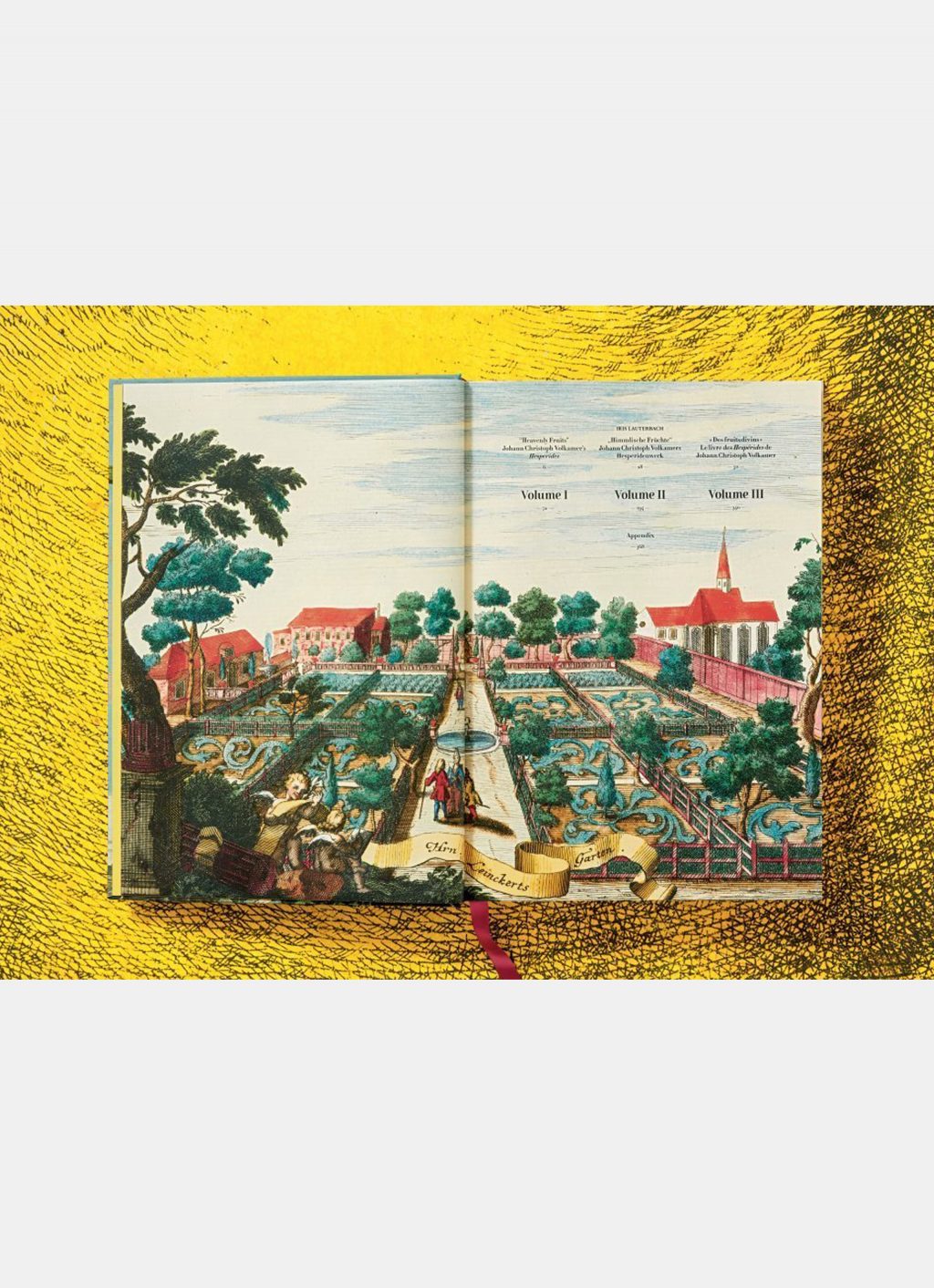 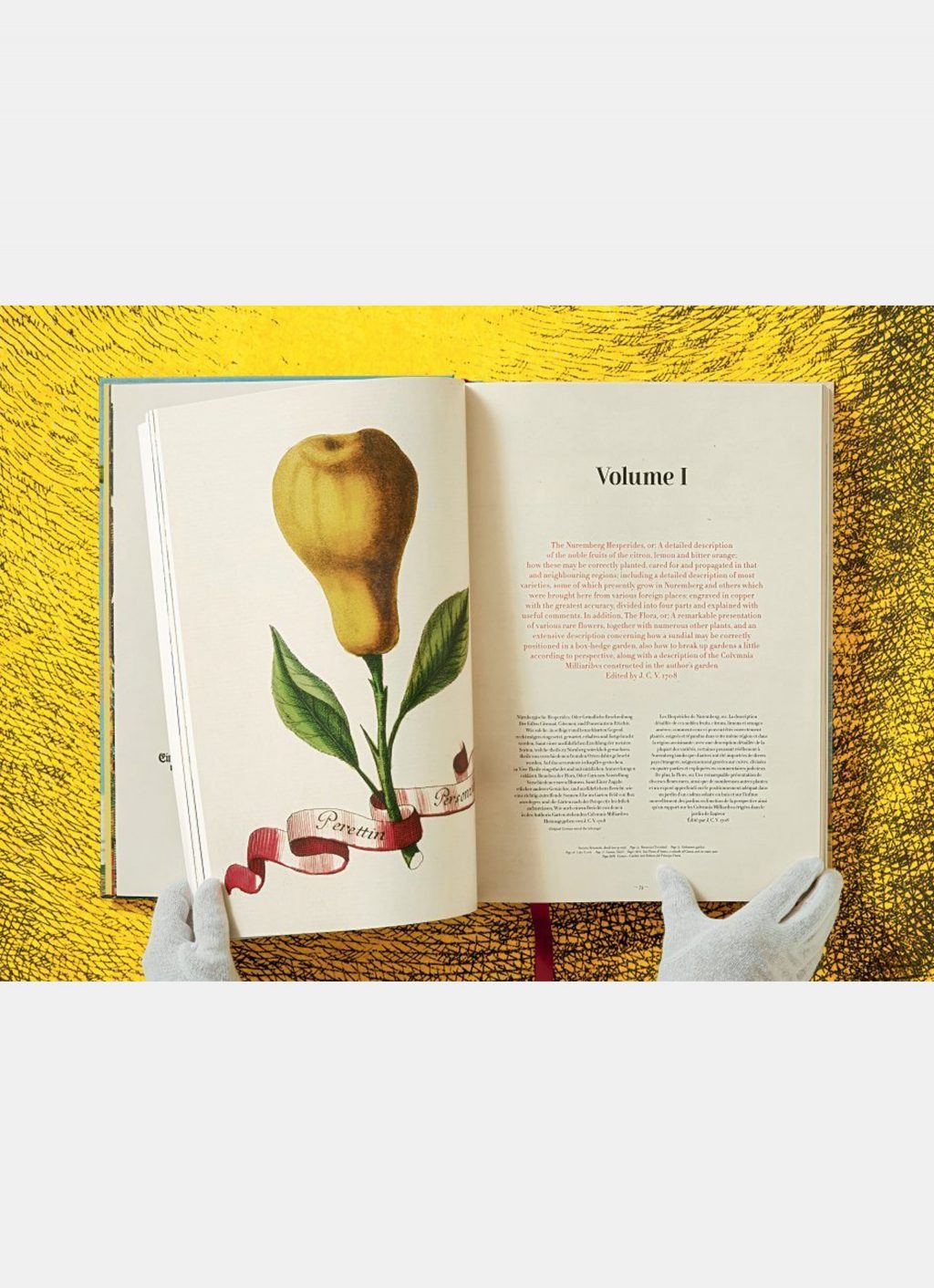 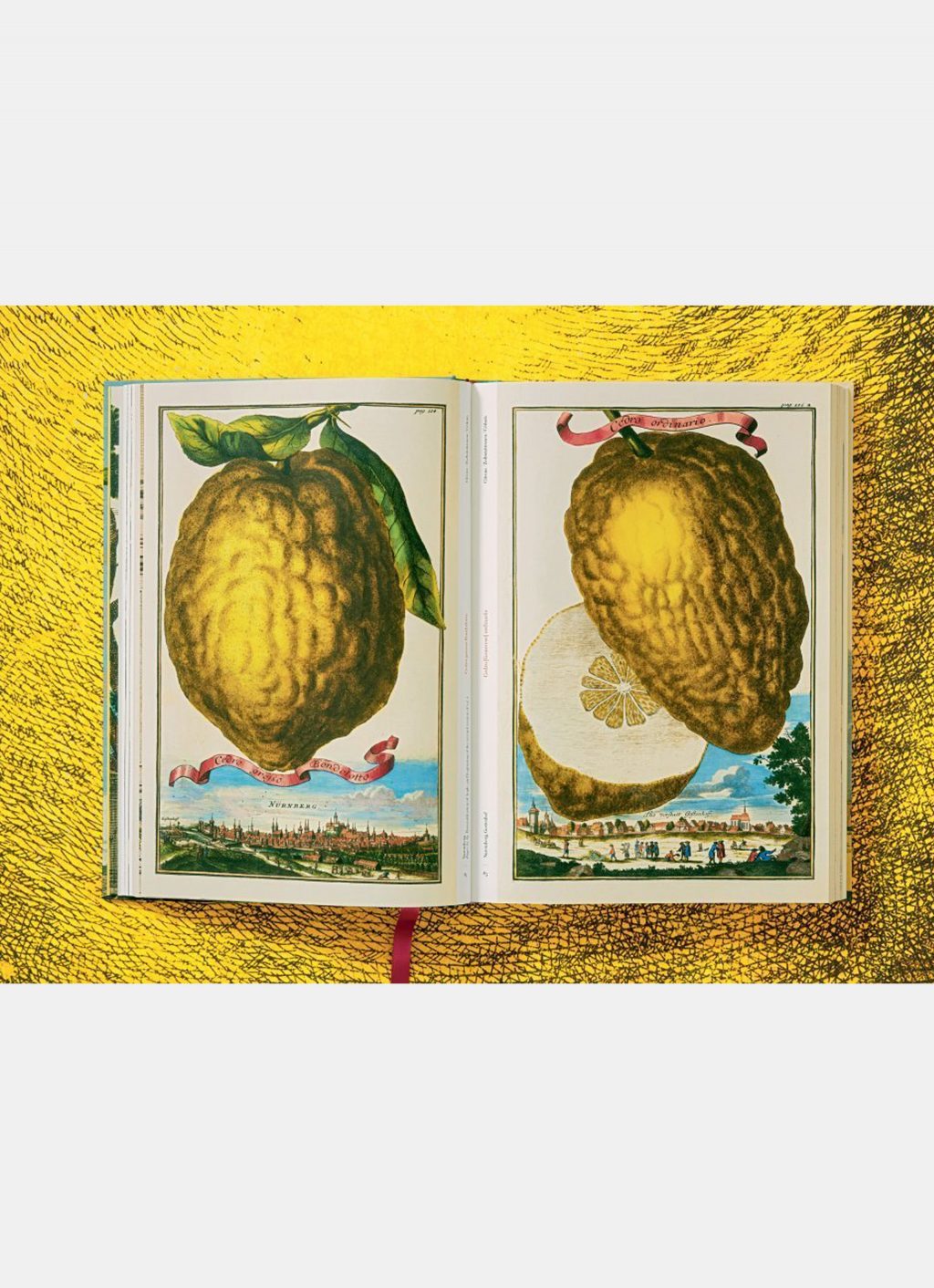 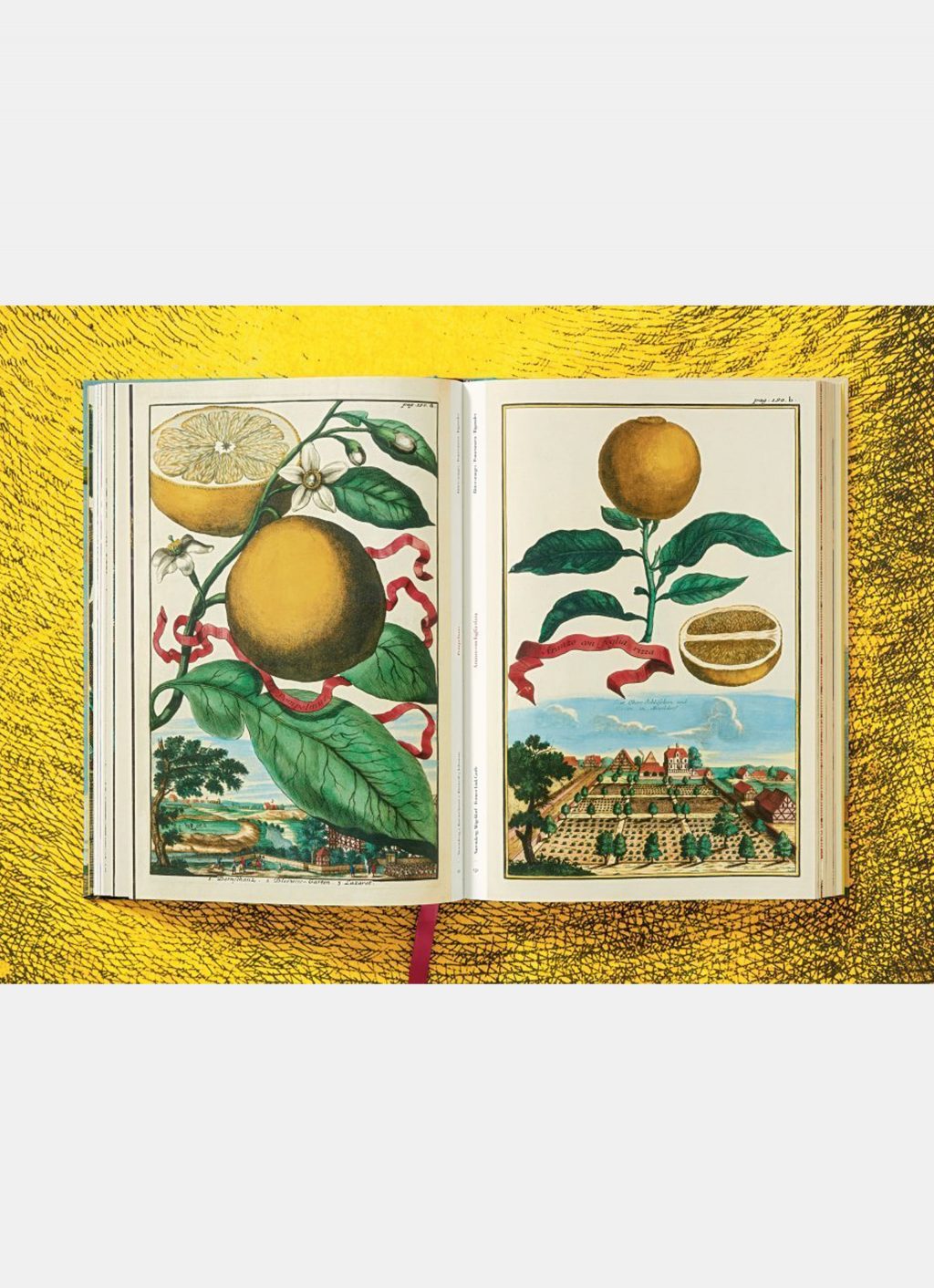 Citrons, lemons, and bitter oranges float like heavenly bodies above Italian villas, Nuremberg gardens, and picturesque countryside in J. C. Volkamer’s ode to the citrus fruit. Reproducing a rare hand-colored set of the copper plates, this publication shows 170 varieties of citrus fruits. Full of fragrance and color, they revive a time when fruits really were exotic.

“It was a longing for warmth and the Mediterranean which people craved, and Volkamer created exactly the stuff that dreams of this kind are made of.”

Have you ever thought of citrus fruits as celestial bodies, angelically suspended in the sky? Perhaps not, but J. C. Volkamer (1644–1720) did—commissioning an extravagant and breathtaking series of large-sized copperplates representing citrons, lemons, and bitter oranges in surreal scenes of majesty and wonder.

Ordering plants by post mostly from Italy, Germany, North Africa, and even the Cape of Good Hope, the Nuremberg merchant Volkamer was a devotee of the fragrant and exotic citrus at a time when such fruits were still largely unknown north of the Alps. His garden came to contain a wide variety of specimens, and he became so obsessed with the fruits that he commissioned a team of copperplate engravers to create 256 plates of 170 varieties of citrus fruits, many depicted life size, published in a two-volume work. The first volume appeared in 1708, with the impressively lengthy title The Nuremberg Hesperides, or: A detailed description of the noble fruits of the citron, lemon and bitter orange; how these may be correctly planted, cared for and propagated in that and neighboring regions.

In both volumes, Volkamer draws on years of hands-on experience to present a far-reaching account of citrus fruits and how to tend them—from a meticulous walk-through of how to construct temporary orangeries, glasshouses, and hothouses for growing pineapples to commentary on each fruit variety, including its size, shape, color, scent, tree or shrub, leaves, and country of origin.

In each plate, Volkamer pays tribute to the verdant landscapes of Northern Italy, his native Nuremberg, and other sites that captured his imagination. From Genovese sea views to the Schönbrunn Palace,each locale is depicted in the same exceptional detail as the fruit that overhangs it. We witness branches heavy with grapefruits arching across a sun-bathed yard in Bologna and marvel at a huge pineapple plant sprouting from a South American town. The result is at once a fantastical line-up of botanical beauty and a highly poetic tour through the lush gardens and places where these fruits grew.

Few colored sets of Volkamer’s work are still in existence today. This publication draws on the two recently discovered hand-colored volumes in the city of Fürth’s municipal archive in Schloss Burgfarrnbach. The reprint also includes 56 newly discovered illustrations that Volkamer intended to present in a third volume.

Iris Lauterbach studied art history and romance languages and literature in Mainz, Pavia and Paris and obtained her doctorate in 1985. Since 1991 she has been a member of the research department of the Central Institute for Art History in Munich and teaches the history of garden architecture at the Technical University in Munich. Her main areas of research include France during the 18th century and the history of European garden art from the 16th to the 20th century, while she has also carried out extensive research about the restitution of artworks that were looted during the Second World War.

Clothbound, 27.6 x 39.5 cm, 4.40 kg, 384 pages
We use cookies on our website to give you the most relevant experience by remembering your preferences and repeat visits. By clicking “Accept All”, you consent to the use of ALL the cookies. However, you may visit "Cookie Settings" to provide a controlled consent.
Cookie SettingsAccept All
Manage consent